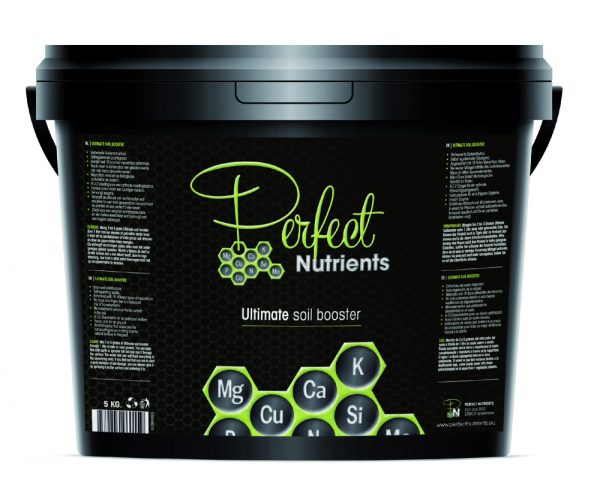 improved soilstructure
selfregulating acidity
enhanced with 16 different types of mucorhizza
no more shortages due to a balanced mix of traceelements.
microelements enhance the bio activity in the soil
4-3-2 bionutrients for an optimized fertilizer
humic acid for an airy soil
rootstimulator that exelerates the compostingproces to bring a better naturall fertilizer to the plant

perfectly suited for:
upgrading used soil in to a super medium
iimproving new soil
making the ideal growformula in cocos
plants that show shortages
The prevention of shortcomings in both short-flowering plants and long-growing plants, such as mother plants.
The planting of new crops.
The overpilling of existing crops.
Upgrading outdoor soil to suited growing soil

MicRo / macRo NUtRieNtS
Mix of trace elements (micro nutrients): B, Cu, Fe, Mn, Mo, zn, Ca, Mgo and others
. Prevents and remediates defects (growth adjustment) in full soil and potting grounds.
Thanks to the combination of trace elements: solving defects that are often combined and well-proportioned, so that the risk of antagonism is minimal.
Rich in organic matter, which can act as a temporary buffer for the trace elements.
In minigram and therefore very homogeneously composed and simple, very uniform to spread over the soil or to divide into the potting soil.

MYcoRRhizza
By nature, most plants live in symbiosis with mycorrhiza fungi.
These useful soil fungi grow with the roots and promote the growth and resilience of the plant.
The fine fungus wires form a link between soil and plant and increase the active root surface.
In potting soil, landfill, new farmland or after tanning, natural mycorrhiza is scarce or completely absent.
When planting (ver) planting, the gemycorrhated roots of hair are damaged, while redding remains a large part of the nursery.
Therefore, adding to mycorrhiza fungi in sowing, cuttings, potting, planting, revitalization, or growth sites, provides many benefits.

Soil StRUCtURE
It is of utmost importance, before planting, to improve soil structure!
The ultimate solves both the problems of heavy clay and soil and sand.
This ultimately improves the drainage of heavy soils that make rainwater flow better and no puddles occur.
Ultimate soil booster implements structure in light sandy soils, which significantly improves its water / air ratio.
Also the structure of potting soil will significantly improve and give roots and soil life more chance to perform at maximum.
Also to be used on cocos which naturally contains nothing much.

HUmic accids
the ultimate is a pure and varied humus source in crumb form, bred with different tribes of useful predatory fungi.
Good airy diet for a rich and healthy root development.

USED: Mix 3 to 5 grams of ultimate soil boost through your new or used ground.
You can bake this with earth or sprinkle full soil and mix it through the surface.
The water and rain will flush everything to the underlying area.
If you find out that you are in short supply because of low dosage, you can always give it by spraying it on the surface and watering it in.

There are no reviews yet.

Be the first to review “Ultimate soilbooster”